We have all heard of ‘old habits die hard’. Taking of which, Kangana Ranaut strongly reacted on Tuesday to the arrest of Shilpa Shetty’s husband, Raj Kundra. This was after Raj Kundra was arrested for making and distributing pornographic films via mobile apps.

She again said that she will expose the ‘underbelly of Bullywood’, and also expressed she plans to do that through her upcoming production venture Tiku Weds Sheru.

She took to her Instagram story and wrote, “This is why I call movie industry a gutter…all that glitter is not gold, I am going to expose the underbelly of Bullywood in my upcoming production called Tiku weds Sheru…we need a strong value system and conscience in the creative industry and of course a whip.” 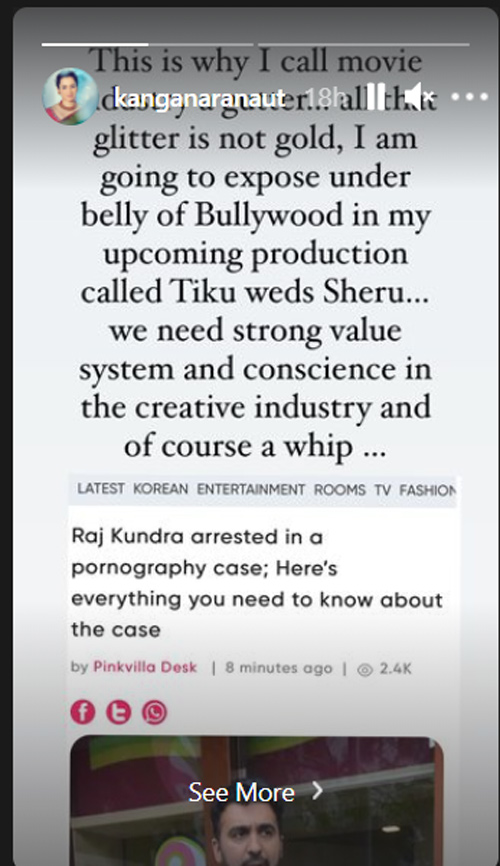 For the uninitiated, Raj Kundra was recently arrested by Mumbai Police in connection with making and distributing pornographic films. He has now been identified as a key conspirator in the case. On Tuesday, he was brought before Mumbai court and was sent in police custody till July 23.

The Mumbai police commissioner said in a statement on Monday, “There was a case registered with the Crime Branch Mumbai in February 2021 about the creation of pornographic films and publishing them through some Apps. We’ve arrested Mr. Raj Kundra in this case on 19/7/21 as he appears to be the key conspirator of this. We have sufficient evidence regarding this.”

What do you think? Let us know in the comments section below!