Divyanka Tripathi Dahiya was recently questioned by a troll on social media about the absence of a dupatta with her suit for Crime Patrol.

The Twitter user had written, "Crime Patrol episode me aap dupatta kyu nahi pahanati hai (Why don't you wear a dupatta in the episodes of Crime Patrol) (sic)." 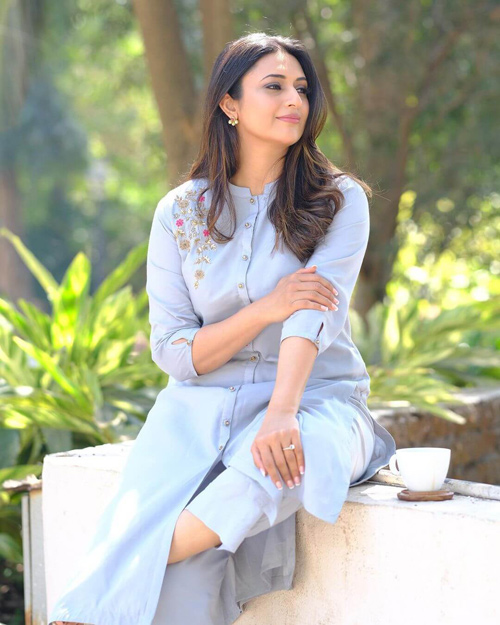 Divyanka replied to the user and wrote, "Taaki aap jaise bin dupatte ki ladkiyon ko bhi izzat se dekhne ki aadat dalein! Kripya khud ki aur apne aas paas ke ladkon ki neeyat sudharen, na ki aurat jaat ke pehnaave ka beda uthaayen! Mera shareer, meri aabru, meri marzi! Aap ki sharaafat, aap ki marzi! (sic) (So that people like you learn to respect women even without a dupatta. I request you not to take upon the responsibility of what women should wear, and rather change the way you and others look at women. My body, my honour, my wish! Your decency, your wish)." 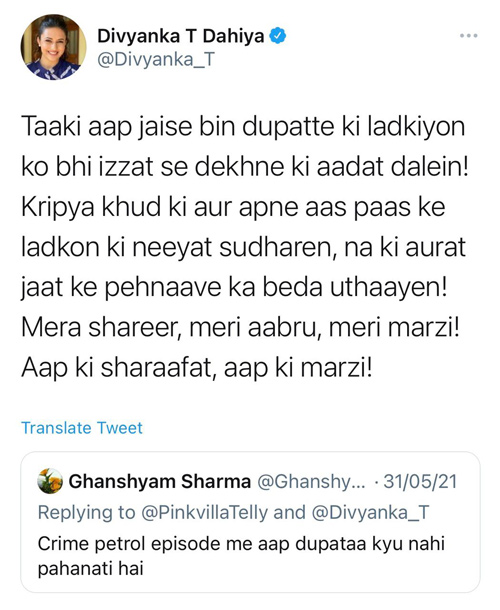 Divyanka, in a recent interview, recalled the incident and opened up on the reason why that remark ‘triggered’ her.

Speaking to Hindustan Times, Divyanka Tripathi said, "As celebrities, we’re bound to catch the eye of many and are constantly under the radar. I, however, have always been against trolls who specifically target women. I teach them how to be. It’s not that I’m a hardcore feminist... I believe in equal treatment for men and women."

“When the troll questioned me about the absence of my Dupatta, it triggered me because what I was preaching in the show was an absolute opposite of it,” she added.

She also added that women are often brutally attacked on social media when it comes to their clothes.

She said, “Social norms differ according to regions and surroundings. Besides, a lot also depends on one’s learning through growing up years. So, no one can truly say what dress or behaviour is right or wrong. The world is grey that way.”

She went on to add, “It really annoys me that during discussions on such topics, women are the first target for correction. I feel, if a person finds a dress inappropriate, they must work on getting some world exposure.”

I completely support her statements. What about you? Let us know in the comments section below.