Siddharth, born Siddharth Suryanarayan, created a niche for him in the Tamil cinema but for people who only followed Bollywood, they got a chance to see his talent in Rang De Basanti in 2006. He is a man of many hats as he keeps juggling between acting, playback singing, screenplay writing, and producing. These days the actor hasn’t been in the news for his work per se but for his tweets.

If you follow him on Twitter, you will know why he, in recent times, became the ‘Badshah’ of controversies. He has been quite vocal when it comes to sharing his opinions and he has been trolled for sharing them on Twitter.

We checked his Twitter account and found five tweets that made him the ‘infamous’ king of controversies. Take a look:

1. A Sharp Dig At The Modi Government 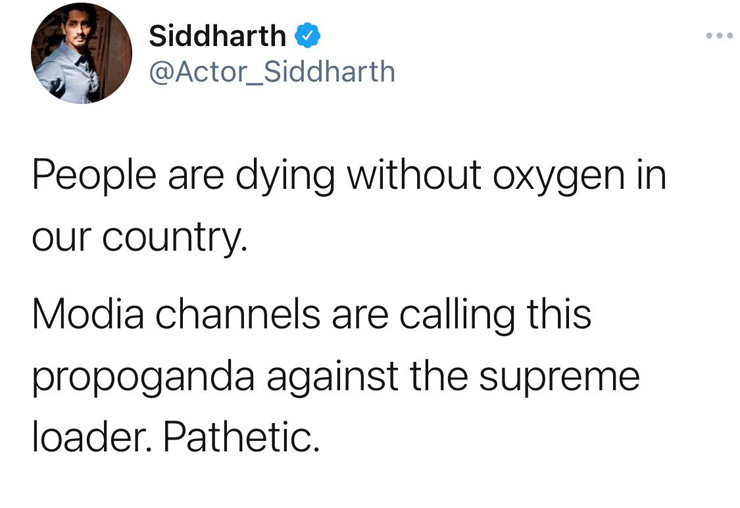 We all know the current situation in the country. From lack of hospital beds to shortage of oxygen cylinders, the country’s health care system has almost collapsed. Siddharth took to Twitter and pinned it all down on the Narendra Modi government. He also took a dig at the media channels that have been supporting the Prime Minister. He tweeted, “People are dying without oxygen in our country. Modia channels are calling this propaganda against the supreme loader. Pathetic.” People bashed the actor for not being out on the field unlike Sonu Sood.

2. His Views On Central Vista Project 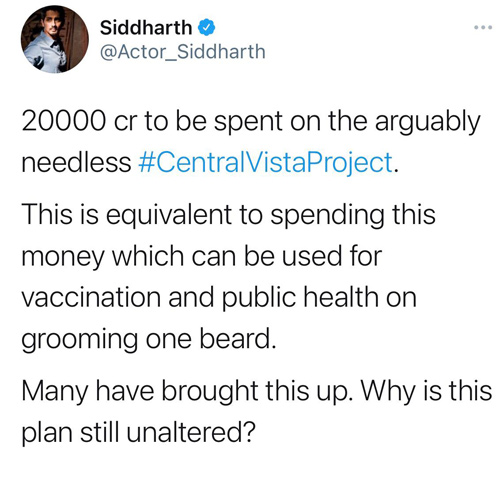 As people across India die due to lack of oxygen, construction of the Modi govt's Rs 20,000-crore complex for MPs is underway. Many have raised concerns with the whole construction around the India Gate. And Siddharth was also appalled to see that the government is continuing with the project and ignoring the current situation at hand. He tweeted, “20000 cr to be spent on the arguably needless #CentralVistaProject. This is equivalent to spending this money which can be used for vaccination and public health on grooming one beard.

Many have brought this up. Why is this plan still unaltered?.” As per the latest development, a petition has been filed by Sr. Adv. Sidharth Luthra for seeking suspension of all kinds of construction activity in relation to the Central Vista Redevelopment Project in compliance with the orders issued by the Delhi Disaster Management Authority in wake of the covid 19 surge in the national capital. 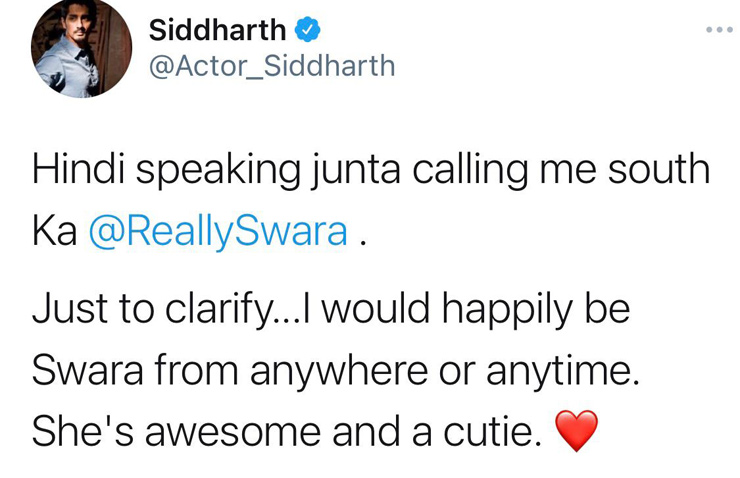 He tweeted, “Hindi speaking junta calling me south Ka @ReallySwara. Just to clarify...I would happily be Swara from anywhere or anytime. She's awesome and a cutie.” This very tweet irked a few people who bashed the actor for trying to create 'communal hate' through his words as he specifically mentioned ‘Hindi Speaking Junta’. People are also asking him not to generalize a section of people because of which part of the nation they hail from. 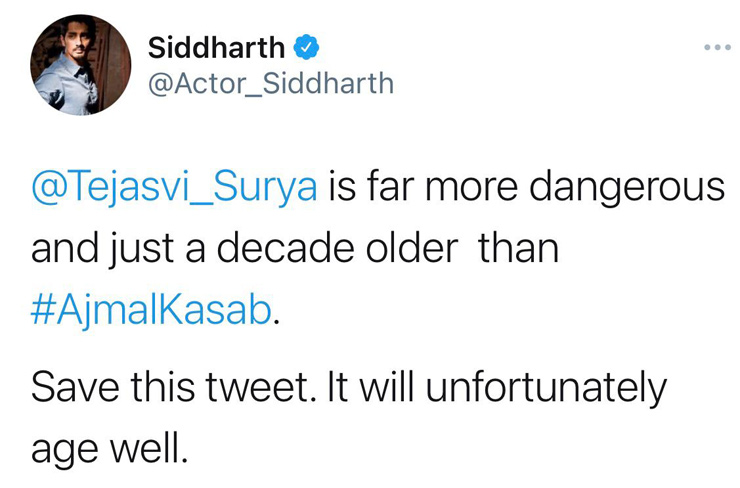 Siddharth targeted BJP MP from Bengaluru South constituency, Tejaswi Surya. In a WhatsApp video, the latter had allegedly accused 17 Muslim volunteers of the BBMP’s south zone unit and said they may be responsible for the lack of beds in the city.  The BBMP south zone war room has 205 members, of whom 17 were Muslims. This attack didn’t go down well with Siddharth and he took a dig at him by comparing him to 26/11 Mumbai attack terrorist Ajmal Kasab. “@Tejasvi_Surya is far more dangerous and just a decade older than #AjmalKasab. Save this tweet. It will, unfortunately, age well,” tweeted Siddharth. This tweet landed him in big trouble.

5. Rape And Death Threats By Tamil Nadu IT Cell Of BJP 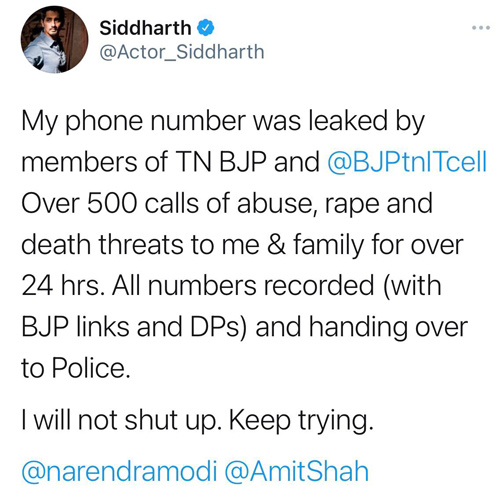