When it comes to naming one of the most improved batsmen between the 13th and 14th seasons of the Indian Premier League, Prithvi Shaw has a commanding lead in the category. Having played in just 8 matches so far, the 21-year old has already scored 80 more runs than his total runs through 13 matches last year and the confidence in his performance shows on his face.

However, every once in a while even the most confident players in the world have a humbling moment. For Shaw, this moment came on Sunday during the match between Delhi Capitals and Punjab Kings, when he had spent just a couple of overs on strike.

A 140kmph delivery by Riley Meredith on the final ball of the third over escaped Shaw’s bat and struck him in the most dreadful place a batsman could imagine, rendering him helpless, on his knees, gasping for air. 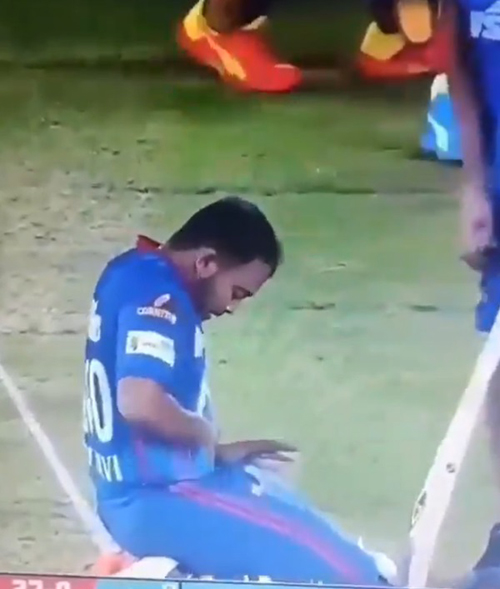 In between overs, a physio rushed to the batter in pain, checked him up and explained that everything was fine. Still, just to calm his mind, Shaw decided to do some inspection of his own. He still on his knees, Shaw began to curiously check something down his pants and gave a big grin once he was presumably happy with what he found.

Unfortunately for the DC player, the cameraman was too quick to catch the entire episode and fans even quicker to record the incident off their television screens to put in in front of the world to watch and rewatch, again and again.

Here’s how the fans reacted to the video:

he is checking all safe?? And his smile indicates that he got a great relief

He was checking, whether it will work or not.

He smiled and was like thank God 2 eggs are still safe.

The IPL has become a source of entertainment for the stuck and struggling people of India, that has been struck with the worst wave of the coronavirus pandemic the world has ever seen. Under such circumstances, the debate over whether or not the tournament should continue to take place arises every single day.

However, in the past couple of days, reports of cricketers testing positive with the virus have surfaced with the rest of the members of the team being pushed into isolation to maintain safety. Monday’s match between Kolkata Knight Riders and Royal Challengers Bangalore was cancelled and Wednesday’s clash between Rajasthan Royal and Chennai Super Kings is also being called off.

According to media reports, the BCCI is contemplating a return to Mumbai’s Wankhede Stadium to carry out the second leg of the tournament from May 7 after Delhi and Ahmedabad locations were deemed unsafe.