Kangana Ranaut has been a strong supporter of the BJP government and her tweets are proof of it.

Some of her tweets, which are political in nature, can be extremely toxic and even have the potential to create disharmony between religions and communities. 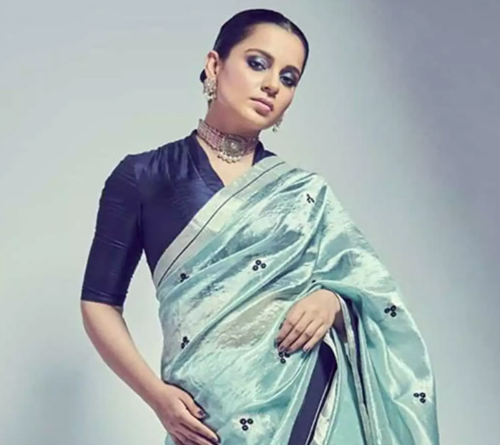 Time and again, she has stirred controversies because of her tweets and people have had mixed reactions to them.

In the latest development, the actor’s account has now been suspended and honestly, it did not come as a surprise.

Turns out, the action was taken following her recent tweet in connection with the Bengal elections. 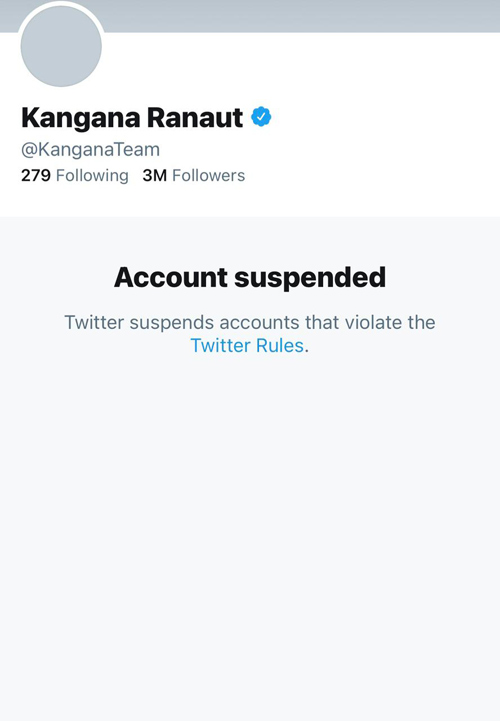 She made comments on the alleged violence that took place in West Bengal after the Assembly Election results were announced recently.

Kangana had demanded president rule in West Bengal after the Mamta Banerjee-led TMC won the election in the state and the BJP lost the battle.

In her tweet, she wrote, "Hundreds of murders and #Bengalisburning But Modi is Fascist and Mamata is a secular leader. Enough is enough #PresidentRuleinBengal." 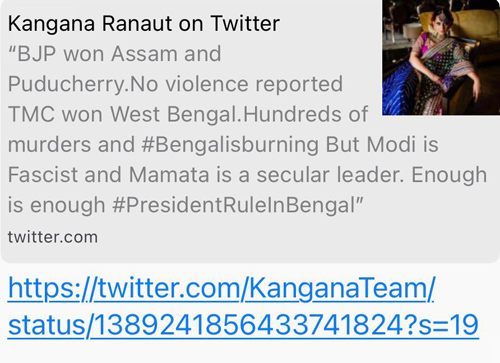 Twitter’s spokesperson has now shared a statement that says, "We’ve been clear that we will take strong enforcement action on behaviour that has the potential to lead to offline harm. The referenced account has been permanently suspended for repeated violations of Twitter Rules specifically our Hateful Conduct policy and Abusive Behaviour policy. We enforce the Twitter Rules judiciously and impartially for everyone on our service."

Kangana had also posted a video talking on the same lines claiming the WB poll result to be the 'death of democracy'.

She even asked the BJP government not to be scared as she wants them to not let the ‘deshdrohis’ rule the nation.

A lot of people are rather relieved that her account has been suspended and have been celebrating the development with memes: 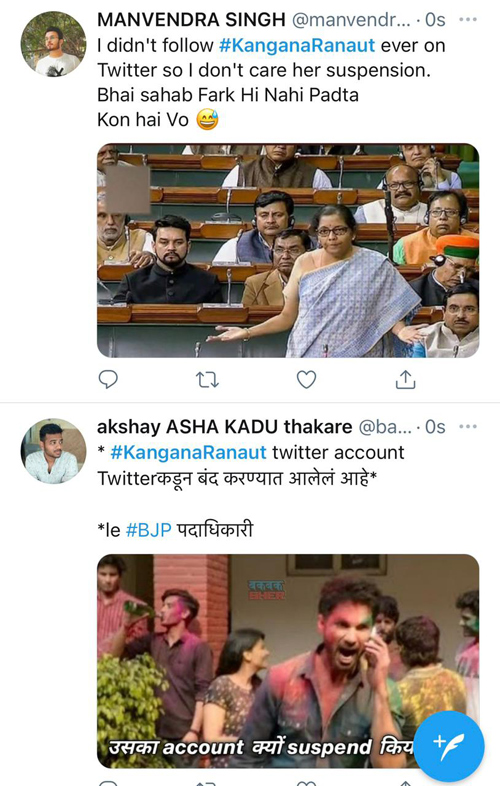 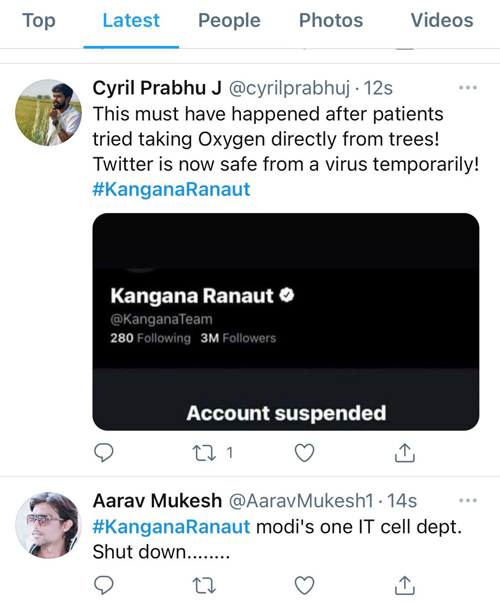 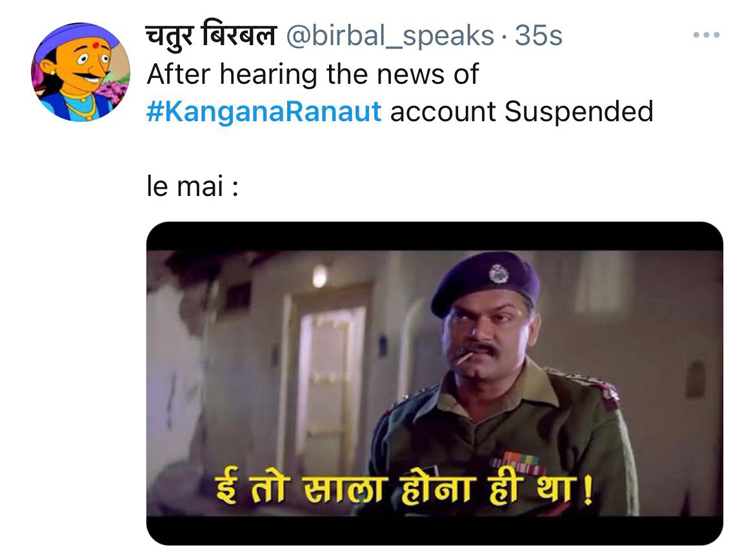 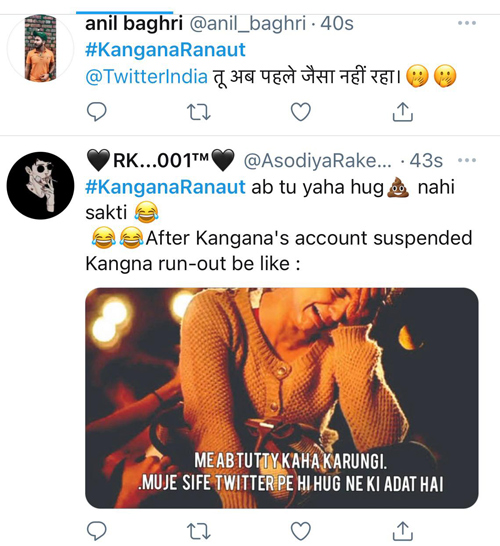 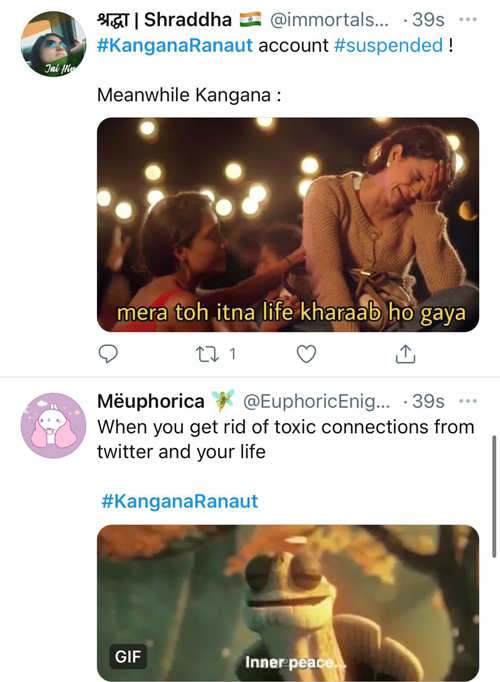 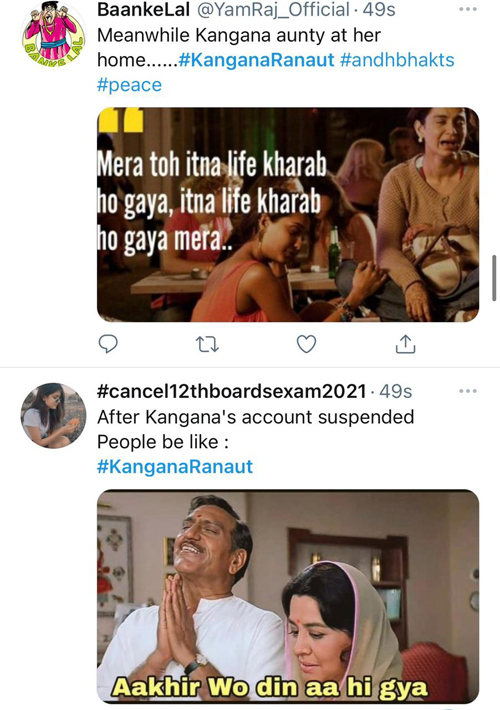 This isn’t the first time that Twitter has taken action against her.

Earlier this year, certain restrictions were imposed on her account after she posted an incendiary tweet against the Prime Video series Tandav.

Kangana took to Twitter and wrote, “Because even Lord Krishna forgave 99 mistakes of Sheshupala.... pehle Shanti phir Kranti (Silence must be followed by revolution).... time to take their heads off... Jai Shri Krishan…”

At that time, a Twitter spokesperson told NDTV, “We prohibit content that wishes, hopes or expresses a desire for death, serious bodily harm against an individual or group of people and take enforcement action when we identify violations which could include placing an account in read-only mode.”

What do you have to say about the entire situation? Let us know in the comments section below.