Kangana Ranaut has never shied away from expressing her opinions and this time she has taken a dig at Sonu Sood. Yes, you read that right! Sonu Sood has helped many migrants and people in general during the whole Covid crisis.

Now, Kangana has liked a tweet that accuses Sonu Sood of being a fraud. Recently, a Twitter user shared advertisement images in which Sonu was seen promoting oxygen concentrating machines. 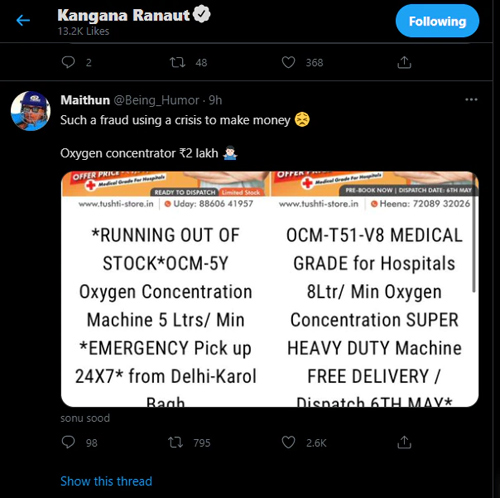 The oxygen concentrating machines costs lakhs of rupees and a Twitter user shared the posters saying, "Such a fraud using a crisis to make money Oxygen concentrator Rs. 2 lakh."

Such a fraud using a crisis to make money

Here’s what people have to say about it-

.@SonuSood you are cheating people whose loved ones are dying.. even 10ltrs of Oxygen Concentrator doesn’t cost 1 lac and you are charging ₹2 lac for 5 ltr oxygen concentrator..

How do you sleep at night doing so much fraud? BMC was right in saying you are a serial offender

Fraud NGOs back in action, found opportunity in pandemic.@nsitharamanoffc @FinMinIndia

He thinks his maseeha tag will make people believe that is the 'cheapest' they can get and order. It is a FRAUD guys stay clear of it.

However, the actor has been endorsing the brand since 2020. A press release on the brand’s website also stated, “brand joined hands with Sonu to be the "face of the company’s new range of Oximeters and Infrared Thermometers. He was chosen to educate people across the country about the correct use of these medical devices and how they are vital in monitoring one’s health."

Sonu and Kangana have had their differences. Earlier, Sonu Sood was part of Manikarnika: Queen of Jhansi but Kangana claimed that he refused to work under a female director. However, Sonu Sood clarified that wasn’t the reality. The actor revealed, "80% of my scenes were chopped off and the scenes that I was narrated were not there."

Later, he expressed that after talking to Kangana he realized that he wasn’t comfortable with what she was asking him to do.

Recently, Kangana also tweeted that people are forcefully taking oxygen from the environment. She wrote, “Everybody is building more and more oxygen plants, getting tons and tons of oxygen cylinders, how are we compensating for all the oxygen that we are forcefully drawing from the environment? It seems we learned nothing from our mistakes and catastrophes they cause #Planttrees.”