The SunRisers Hyderabad are in the news for all the wrong reasons ever since they decided to make a very bold move in not only taking away the team captaincy from Australian batsman David Warner but also dropping him from the Playing XI ahead of the match between Rajasthan Royals.

While the decision to give the captaincy to New Zealand skipper Kane Williamson still made a lot of sense and the fans were actually behind the management’s decision to do so, the news of Warner being left out of the batting order quickly turned the SRH supporters against them.

It was under Warner’s leadership that the franchise won their only championship back in 2016 and the kind of love and support the Aussi has shown towards the team and its fan-base had made him the most lovable overseas player in the region.

It seems David Warner’s family members had also gotten extremely close with the franchise and when the news of him being dropped from the roster first reached them, his brother, Steve Warner expressed his disappointment with the team. 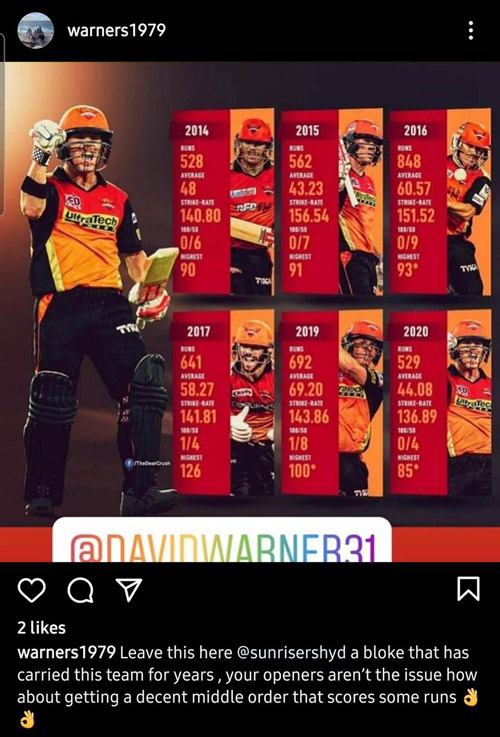 “Leave this here @sunrisershyd a bloke that has carried this team for years, your openers aren’t the issue how about getting a decent middle order that scores some runs,” he wrote in the caption while sharing his brother’s exceptional batting record as a member of the SRH franchise over the past six years.

During the 14th edition of the Indian Premier League, the Hyderabad team played a total of six matches under Warner’s leadership but managed to win just one. Anchored at the very bottom of the IPL Points Table with just two points at the moment, the season does not look too promising for the one-time champions.

After his final defeat as the captain, Warner had made an emotional statement about how he wanted to take full responsibility for the losses.

"I take full responsibility. The way that I batted was obviously very slow," Warner had said after losing the match to Chennai Super Kings on Wednesday.

"I was hitting a lot of fielders and [was] very, very frustrated... Look, I take full responsibility from a batting point of view. I felt [that with] Manish [Pandey] coming back into the team, the way that he batted was exceptional. And obviously Kane [Williamson] and Kedar [Jadhav] towards the back end there, they put some boundaries away and got us to a respectable total. I felt that we were probably just below par from where we were. But yeah look, at the end of the day, I'll take full responsibility," he had added.