An Australian-Italian team used a Murchison Widefield Array (MWA) telescope to discover one of the most mysterious anomalies in space. The jellyfish-shaped cluster was discovered in a galaxy known as Abell 2877. The massive entity extends for more than one million light-years and is made of plasma. From Earth’s perspective, the entity looks abnormally like a Jellyfish which is why it has been bestowed the name “USS Jellyfish.”

Study lead and PhD candidate Torrance Hodgson, from the Curtin University node of the International Centre for Radio Astronomy Research (ICRAR) said the team observed the cluster for 12 hours at different radio frequencies. In fact, the USS Jellyfish can only be viewed at a very narrow band of low frequencies under 200 Mhz. The reason why it has gone unnoticed for so long is that the cluster is invisible to most radio telescopes in the world. It is also the reason why the cluster is called “USS Jellyfish” where the abbreviation stands for Ultra-Steep-Spectrum. 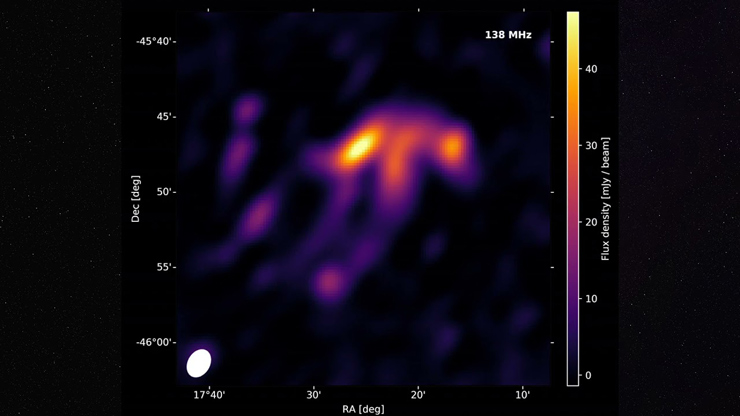 “As you turn up the frequency dial, its brightness drops off exponentially, quickly rendering it completely undetectable to conventional, higher-frequency radio telescopes,” Hodgson said in the academic paper.

The scientists explain that the USS Jellyfish phenomenon is due to a very rare sequence of events that played out over two billion years ago. The Jellyfish structure is scattered between galaxies that may have contained energetic cores referred to as active galactic nuclei (AGN). These nuclei emit massive amounts of light and massive black holes at the centers of each galaxy. 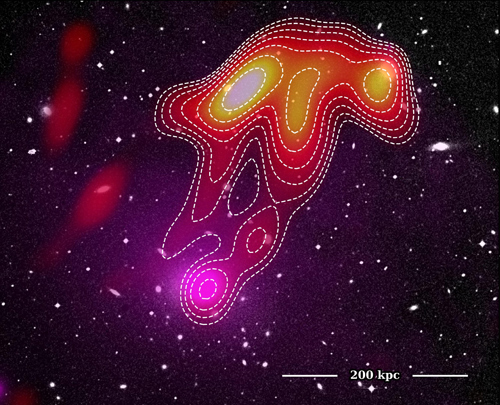 "Then quite recently, two things happened -- the plasma started mixing at the same time as very gentle shock waves passed through the system. This has briefly reignited the plasma, lighting up the jellyfish and its tentacles for us to see” the paper said.

The MWA telescope, a precursor to the Square Kilometre Array (SKA)  is located at the Murchison Radio-astronomy Observatory in remote Western Australia. The site has now been chosen for the construction of low-frequency antennas for the SKA. The SKA will give researchers an unparalleled view of the low-frequency Universe according to Professor Johnston-Hollitt, Mr. Hodgson’s supervisor and co-author.