Often labelled as barbaric and grotesque, Mixed Martial Arts (MMA) is much more than just two people fighting a bloodied war inside a cage. In fact, MMA is one of the most realistic and purest sports around which brings various martial arts, based on striking, grappling and ground fighting, together in a single bout.

Today, MMA is undeniably one of the most popular sports around the world and the Ultimate Fighting Championship (UFC) has proved to be its biggest stage. Incorporating multiple forms of martial arts into their overall fighting style, MMA fighters continue to capture the imagination of fans and set new records at pay-per-view events, every time they step foot in the octagon. 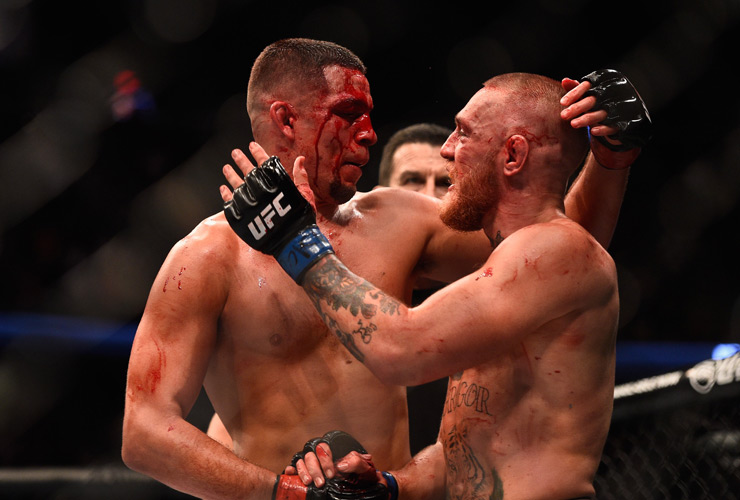 Pitting some of the fiercest fighters from all around the globe against each other, the UFC has managed to find a fanbase in places that once didn't seem possible. And, that's largely been made possible by the beasts setting the octagon ablaze with their unmatched skills. From the submission-style chess matches to the bloodied ground-and-pound thrillers, we've seen it all at the UFC events.

But, ask any fan and you'd know that there is nothing more exciting than an unexpected knockout. The sheer feeling of those goosebumps you get when a fighter drops their opponent in a flash is what makes this sport so exciting.

Thus, reliving those pulsating moments, here's a look at 10 most savage knockouts in the UFC history:

At UFC 194, Conor McGregor finally had his moment against the then-pound for pound best fighter in the world Jose Aldo. Going into the fight, few backed the brash Irishman to deliver the goods against the Brazilian but no one could have possibly imagined what eventually happened inside the octagon that day.

Kickstarting his reign, McGregor's very first punch knocked out Aldo and earned him the Featherweight title in 13 seconds - the fastest finish in a UFC title fight.

While Gina Carano will probably remain the pioneer of women's MMA, it was undeniably Ronda Rousey, through her association with the UFC, who took it to mainstream audiences.

Crowned the first UFC Women's Bantamweight Champion in 2012, Rousey ran through her opponents with fast finishes and dominated the division. But, her three-year reign as champion finally came to an end after a shocking loss against Holly Holm at UFC 193. A brutal kick to her jaw saw Rousey getting knocked out, leaving her face bloodied with broken teeth and wide cut on the lip.

Every sport has got its own set of rivalries and the UFC is no different. While many fighters have forged rivalries over the years, none comes close to the popularity of the one shared between Jon Jones and Daniel Cormier.

The two light heavyweight fighters continue to push each other to their limits. Whether it's their weigh-ins or all-important bouts, there is never a dull moment when it comes to these two. One of those pulsating moments came at UFC 214 where Jones got the better of Cormier with a hard head kick before finishing his opponent off with a barrage of punches against the cage to win the title.

While many fighters develop a rivalry in the octagon, Dan Henderson and Michael Bisping forged one as opposing coaches during one of the seasons of 'The Ultimate Fighter' reality series. Thus, when the two were gearing up to face each other at UFC 100, it wasn't hard to guess what was going to happen inside the octagon.

The two fighters got to it right away, but Bisping's usual stick-and-move style of kick-boxing didn't seem to trouble Henderson. Soon, Bisping made the biggest mistake of his fight after circling right into Henderson's notorious right hook, also known as the H-Bomb. Right upon impact, Bisping fell flat on the ground as Henderson landed another elbow to finish him off.

Remember the last fight sequence in the original Karate Kid? Daniel LaRusso was up against Johnny Lawrence in the all-important tournament where he employed the famous 'crane kick', taught to him by Mr Miyagi, to score the crucial point and eventually win the contest.

For years, it was believed that the impactful 'crane kick' looked good on reel, but wouldn't work in a real-life environment. But, Lyoto Machida proved everyone wrong. At UFC 129, Machida didn't just knock Hall of Famer Randy Couture out, but he did so via the same 'crane kick' that everyone deemed a fictional fight move. All hail, the real 'Karate Kid'.