This weekend, the city of Pune saw thousands of young music enthusiasts pouring in to catch their favourite artists at the 10th edition of the NH7 Weekender - one of Indiaâs biggest music festivals. Many such groups use budget hotel bookings as a way to affordably and conveniently plan their stays - although several of them were in for a rude shock as the festival kicked off this Friday.

âI booked this hotel 4 months prior,â explained Simran, a guest of Gurugram-based hotel chain FabHotels. âA lot of people come to Pune for the Weekender so I wanted to plan my stay before the world did so I could book with convenience and within budget. I had a confirmed booking since Day 1 but I still called them on 24th November to double-check. Everything seemed fine. Got an email and a text on 27th with further details about my stay.â

The trouble began early this Friday, when customers such as Simran arrived at their hotels, expecting a fresh room to use as a basecamp for a fun, exciting and long-awaited festival. Upon arrival however, FabHotel customers were appalled to find out that their bookings were fraudulently cancelled. 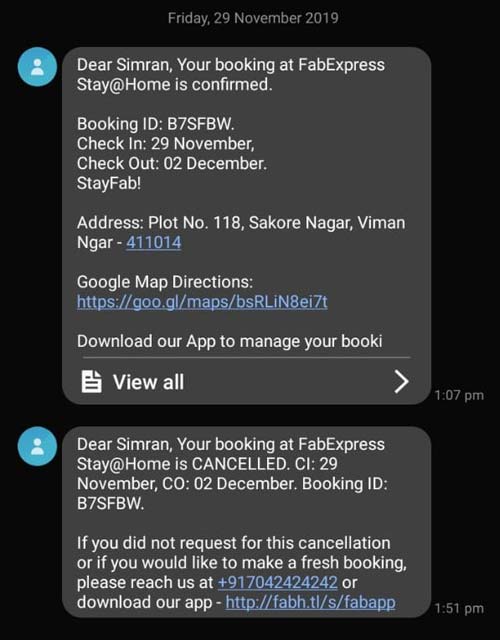 Caption: A screenshot taken during what was supposed to be check-in time. Notice how the booking is accepted, then almost immediately cancelled with no intimation. Reminds me of certain cab drivers.

âI get to the hotel and turns out it's not a FabHotel anymore. The guy at the reception says I don't have a booking there. They ask me to call Fab, and talk to them.â

What ensued was a customer-service nightmare.

âFrom noon to around 4:30 in the evening, I constantly keep calling the helpline,â she continues. âThere's a 10-15 minute hold. It connects, and I explain my situation to the executive. He says that my booking was changed and he has shared the updated information with me. I check my email and it's the exact address that was originally shared. I'm obviously furious so I tell him this, and he hangs up on me. I call again. Another 10 mins hold. I connect with another executive and I start from scratch. He is confused so he puts me on hold again. Call drops. I call again. This goes on for 4 hours. Rinse and repeat.â

A great number of attendees of the music festival could be seen dragging their suitcases in search of alternative accommodation options. Most of these were expensive due to high demand, forcing customers to spend an extra 50% of what they had previously budgeted - a truly painful cost to incur during the month-end crunch. FabHotels responded by asking customers to âtreat this as an exception.â

ââKindly treat this as an exceptionâ is really too much to ask for. Also, this has happened to a bunch of other people so how many exceptions is FabHotel expecting the world to made? I would really like to know,â fumes Simran.

FabHotels eventually produced a statement when prompted - although the lack of clarity is telling. âWe disassociate with some of our partners if they do not match up to our quality,â said Anupam Sharma, a representative of FabHotels. When questioned over accommodating the customers who made bookings in advance, FabHotels had no response.

However, Stay At Home, a former partner with FabHotels, said that it wasnât a quality issue, but that they did not make payments in time that forced the apartment owners to stop working with the institution.

âThey defaulted numerous payments. They were focusing on discounts and not giving us the money in time. We stopped giving them booking about six months ago,â said a service apartment owner. As of now, FabHotels currently advertises âupto 60% offâ its bookings.

These issues were primarily concentrated in Viman Nagar, an upscale residential neighbourhood in East Pune which was the prime choice for festival attendees due to its proximity to the venue and its large concentration of hotels.

âWe had a group who made an advance payment of Rs 29,000 through FabHotels but we had no idea about it. About 5-6 groups have come to us today,â said a service apartment owner in Viman Nagar.

The hospitality industry in India is worth above Rs. 7,000 Cr, 70% of which comprises of budget hotels. Several new chains have sprung up in recent years, such as Oyo and Treebo - both of which have secured millions of dollars in funding from Chinese and Japanese investors. FabHotels themselves have raised Rs. 54 Crore from Goldman Sachs, Accel Partners and Qualcomm earlier this year - although it seems like that money isnât being used responsibly. 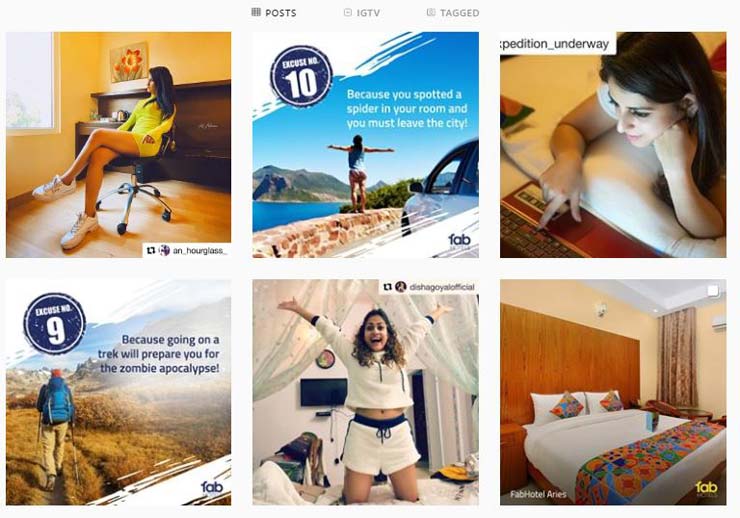 Caption: FabHotels has recently been pushing on social media marketing - roping in popular influencers to showcase their hotels.

âThe least they could do is give us alternate accommodation. Or maybe just not scam people like this? That'd help. You cannot ruin my weekend and ask me to stay fab,â concluded Simran.