A pair of axe-wielding thieves pulled off what might be the greatest art heist in decades, after breaking into one of Europe's most valuable vaults and escaping with treasures worth upwards of $1 billion.

The heist took place at Grünes Gewölbe (The Green Vault), a museum in Dresden, Germany. Dresden has been a historical capital of culture and the arts for Germany, surviving through horrific bombings during World War 2 and retaining a legacy that has lasted since the early 1700s. It has since been used as a display venue for a collection of about 3,000 antique jewellery pieces, and many consider it to be one of the oldest and most valuable collections in the world.

So How Did They Do It?

At the heart of any good heist story is a good plan, and the people behind this theft were clearly well-prepared to deal with potential challenges. The plan was set into motion at 4am on a Monday morning, when the thieves set a controlled fire at Dresden's Augustus Bridge. 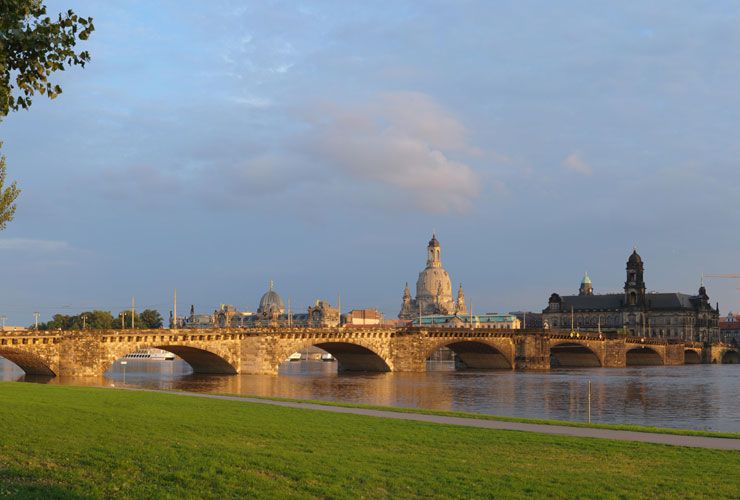 © There has been a bridge at this very spot for nearly ten centuries - a testament to Dresden's rich culture. (Wikimedia)

The fire was a carefully planned move to destroy a nearby power box. Once the unit failed, it cut off power to all security systems in the museum, except for the CCTV cameras. Soon, the thieves snuck their way towards the 'Jewel Room' window, cut its iron bars off, and entered the vault within.

The Jewel Room itself had 10 sets of priceless jewelry, three of which were nabbed after the thieves smashed their casings with axes. The stolen items include the diamond-laden breast star of the Polish Order of the White Eagle, a hat clasp with a 16-carat diamond, a diamond epaulet and a diamond-studded hilt containing nine large and 770 smaller diamonds, along with a matching scabbard.

That's a lot of goddamn diamonds. According to German tabloid Bild, the jewels are worth around $1.1 billion, or nearly Rs 8,000 Crores. Marion Ackermann, General Director of Dresden's state art collections, said it was likely impossible to estimate the price of the stolen items due to their historic cultural value.

The loot could have been even more ludicrous if the museum's 41-carat 'Dresden Green Diamond' wasn't on loan to New York's Metropolitan Museum of Art - the incredibly rare gem was mined from Kollur in Andhra Pradesh some 300 years ago.

Taking off with the goods, the thieves fled the crime scene just about an hour after beginning the heist, at 5 AM.

Naturally, the heist has drawn immense interest on the internet. Many people were taken aback by how easy the heist actually seemed:

In this age and times they still keep valuables behind 2mm glass?

I thought they use cutting edge laser technology for glass, doors and wall. Still a hammer works ð pic.twitter.com/H6tHwbPBY6

While others inevitably drew some movie comparisons - this story is right out of a Hollywood blockbuster, after all.

Many compared the heist to the wildly popular Oceans series. The ensemble-cast thriller starring Brad Pitt, George Clooney, Matt Damon and more centers itself around high-profile heists - usually in casinos. What's truly fascinating however, is that the value stolen by these 'Dresden thieves' amounts to nearly thrice the amount stolen in Ocean's Eleven and Ocean's Twelve combined!

Currently, police and the public at large are speculating who the mastermind behind the heist is. No prime suspects are currently in play, though.