After England amassed a mammoth total of 477 runs in the first innings, none of the cricket pundits or even the fans could have imagined India to respond  the way they did to strengthen their position in the inconsequential fifth Test in Chennai.

Scoring over 750 runs, the Virat Kohli-led side came out strong to counter their opposition. Opening batsmen KL Rahul (199) and Parthiv Patel (71) gave the home side a solid start but it was the middle-order batsman and Test newbie, Karun Nair, who stole the show.

The right-hander, playing only his third Test, notched up a blistering triple hundred to grab the spotlight from India's proven and more popular stars. The 25-year-old became only the second Indian batsman after Virender Sehwag to slam a triple ton in Test matches. 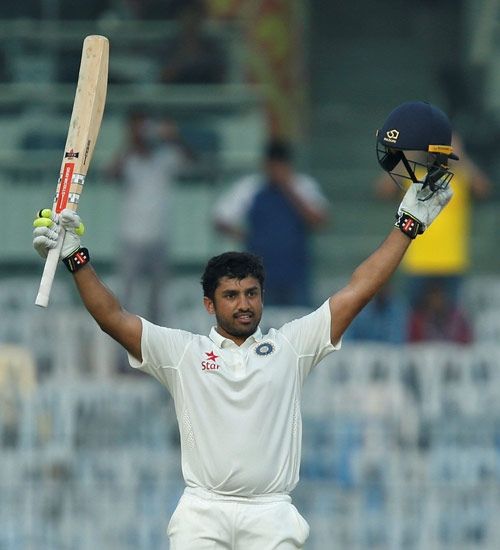 The Karnataka batsman achieved the feat in the 191st over after cutting the ball past point for a boundary. In the process, Nair also became the third player in Test history, and the first Indian, to turn his maiden hundred into a triple century.

With Nair achieving his triple hundred, captain Kohli quickly declared India's first innings at a whopping 759/7 - their highest and the seventh highest (overall) Test tally of all time. They were only seven runs away from breaking into the top five.

For England, it was the highest total they have ever conceded in their Test history.

This must seem like a beautiful dream for Karun Nair. What joy to pinch yourself and realise it is for real......

Congratulations on the historic triple century @karun126! We all are delighted & proud of your remarkable feat.

Karun Nair is batting like he is terrified of Kohli declaring before he reaches 300.

What an amazing innings from Karun Nair...was dropped on 34,who would have thought he will go on to make a triple century #IndvsEng

What a day 4 India at Chepauk. @karun126 heartiest congratulations on this marvelous 300. 2nd Indian to achieve after @virendersehwag @BCCI

What a special innings by a guy who has been waiting in the wings for a long time now.. take a bow Karun Nair #INDvENG

Getting to a double hundred and a triple hundred in the same session! Hats off @karun126 #INDvENG