He’s a great actor. But, he’s a better conversationalist. That is Aditya Roy Kapur in a nutshell.. It comes easy to some people—he is one of them.

I entered his hotel room to find Aditya sitting at the swanky study table at the far end of the room, in an ashen grey and white striped shirt and a pair of done and dusted denims. He was chill—in every sense of the word. He seemed at ease, even though his team kept stating how incredibly tight on schedule he had been. He didn’t seem to care. He was all set to walk the ramp for veteran designer Rajesh Pratap Singh for the Blenders Pride Fashion Tour last weekend, in Gurgaon. “I feel honoured to be the showstopper for him (Pratap),” Aditya said enthusiastically. “I mean his work needs no introduction and I love wearing his garments. So it made complete sense.” 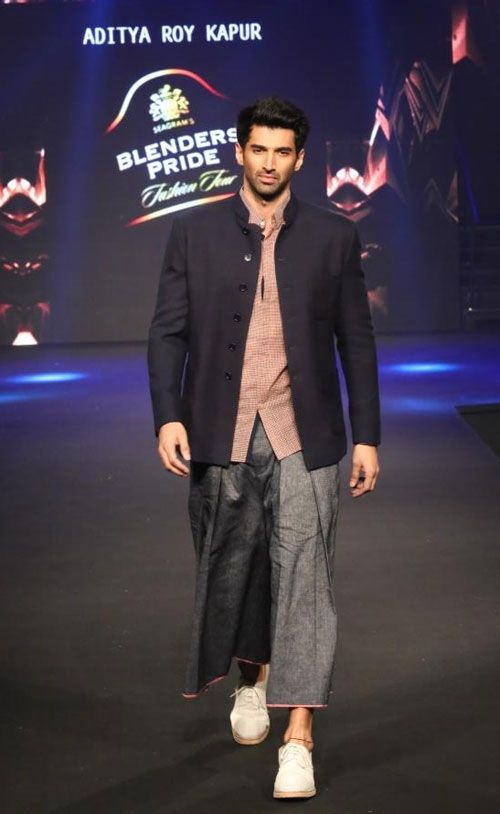 As someone from the film fraternity with a lineage of industry hobnobbing and two successful brothers and one veteran actor of a sister-in-law, he’d be well within his right to be snooty. But, Aditya doesn’t seem to have any starry tantrums. It felt like meeting someone ordinary for the first time and striking a good conversation from the word ‘Go’. Over a period of a few minutes, we spoke about various different topics and here’s all that we now know about the Kapur lad.

“I don’t know if I’m very stylish, to be honest. Sometimes if I see something interesting, I’ll go with it. But I pretty much stay the way that I always have when it comes to dressing. Most men are like that, actually. We don’t believe too much in doing too many looks. I don’t like looking like a catalogue. I stick to what I’ve always been comfortable with. So, that way, maybe style is just about comfort for me.”

“In Bombay it’s either really hot or it’s not so hot. And having been born and brought up in the city, over the last couple of years, I’ve noticed that we’ve developed a season that is somewhat like a winter. But, it’s enough of an excuse so that’s not like a real winter. But, honestly I would love a winter if I had one.”

“I work out about 5-6 times a week. I go through phases where sometimes I don’t work out at all. But now, over the past year and a half or so—ever since I’ve gotten into shape for my last film ‘Fitoor’—I’ve kind of stuck in the workout zone.”

“An off day for me can consist of either nothing or it be a combination of things, like going to the gym, heading out for a beer, going out and playing some pool. I play some sport, like football, cricket, snooker, I swim; I’m a bit sporty. But, sometimes meetings tend to come up even on off days.”

“I’m a beer guy. I like this beer called Blue Moon which you don’t get here. It’s like a Hoegaarden but, only a bit stronger. I take it with a slice of orange.”

“I absolutely love Indian food. But, that doesn’t mean I get to eat it, thanks to my diet and workout schedule.”

“I like reading biographies of actors and musicians. Books are very sporadic and don’t really have a structure. I also read Asterix and Obelix.”

“I’m a lone traveller, actually. So, over the years, I’ve always just picked up a backpack and gone and stayed in hostels. I’ll disappear for a month here and there. But, I haven’t done the hostel thing in a couple of years now. I’ve stayed at hotels but I get more bored. Maybe, it’s because I’m 31 years old now. Back in the 20s hostels were a lot more fun to do. There’s a different kind of freedom you get in being anonymous.”

“I went to Hawaii for a 60-day holiday. And I stumbled upon an active volcano on the big island. It was a beautiful night I had. There was this girl I had made friends with; it was on private land and we had trespassed, walked through some jungles and we chanced upon this sea of growing lava. There were about 50 people, all locals. I sat there the whole night and watched lava flow and I was throwing stones into it; it was that close to me.”

“I don’t know what dates are, really. I don’t know if I’ve gone a date as such in a long time. Do we even have this culture of dates? It’s more like setting the scene—a good conversation, a great scene, some wine… I don’t know. A perfect date is probably when you don’t leave half way through it.”

“I recently watched a TED Talk on 10 ways to have better conversations and that was a very interesting talk. I feel like I tried to imbibe a lot from that and I felt like I do a lot of things that the speaker said one shouldn’t do. I guess a good conversation is one that just flows naturally and doesn’t have any preconceived notion that the person may have; without feeling the pressure of seeming too smart actually.

I don’t remember the last time I had a good conversation. They don’t really stick with me—they come and go. But, there was one, three days ago, at the gym. Actually, it had to do with some real estate but it was good conversation.”