Reports about Sanjay Dutt insulting Ranbir Kapoor after getting drunk at a party are doing the rounds and it’s disappointing for more reasons than one.

According to a report by DNA, the incident happened at a party at Sanjay Dutt’s residence. ''Many drinks had been downed by the time the story starts. That night RK was the only one in the group neither drinking nor smoking.'' A source told DNA. Sanjay Dutt apparently got drunk and shamed Ranbir Kapoor for his work.

“I want to produce a film starring you,” said Sanjay Dutt. ‘Of course’, came the reply from Ranbir. Then, with a straight face, Dutt said, ‘The film is called Laddoo’. The Kapoor boy repeated the word questioningly, only to receive a retort, “Yes, after that we will make films called Imarti, Jalebi and then Peda,” a source told DNA.

There was a bit of awkward silence but Sanjay Dutt continued insulting Ranbir in his drunken stupor. “I watched Barfi! on TV recently. What made you do a film like that? @#$^&* bloody hell, you are playing me in the Sanjay Dutt biopic. I don’t know how they cast you.” 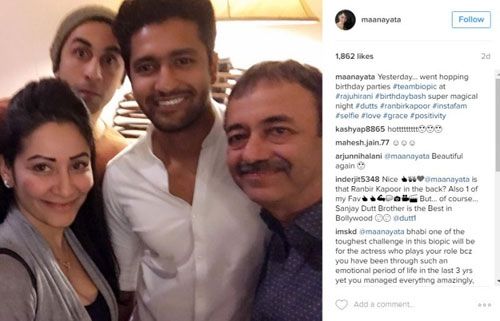 “You should be a macho man. Act in macho films. You can’t be doing films like Barfi!. You should be holding guns and doing action films. Do you think actors like me, Salman and Ajay would have been around for so many years, if we had not played macho characters on screen? You have no connect with the masses and that is very important.” He went on.

Ranbir Kapoor kept his cool and chose not to argue. Sanjay Dutt’s wife came in at the right time, broke the awkward silence and everyone had dinner.

If this incident really is true, it’s a major disappointment. Not only does Sanjay Dutt’s statement reeks of century-old gender stereotypes, it also insults one of the finest works (Barfi) of the best actors of this generation. It was probably meant in jest and there’s no way to know if Ranbir took offense until he decides to talk about it. What do you think about this incident? Tell us in the comments box below.