One can find multiple excuses to not do anything but if you set your eyes at a task, nothing can come in your way to achieve your dream. We have heard of ‘ironmen’ or ‘men of steel’ who have completed the toughest of the races and marathons in their lives and sometimes in the most unfavorable conditions as well. Their achievements deserve to be embossed in gold in the history of sports. One such inspiring story is of 62-year-old Evans Wilson who finished the Seattle Marathon despite having a terminal lung disease! 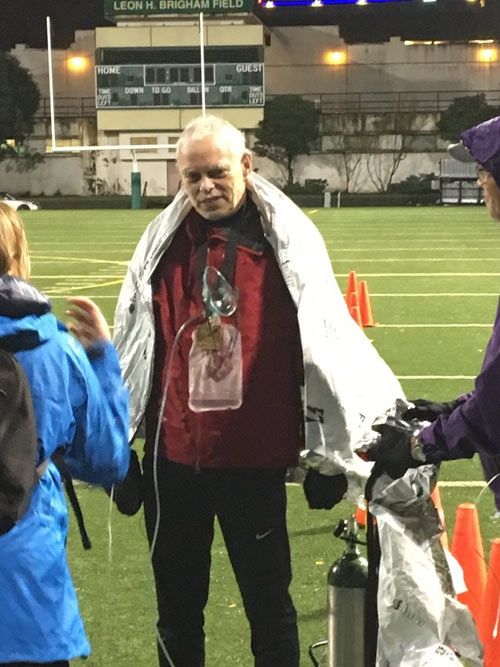 Graham Greene once said, “A single feat of daring can alter the whole conception of what is possible” and Wilson’s courage only establishes this statement. Participating in a marathon can leave any 20-something panting, but Wilson, who suffers from Pulmonary Fibrosis (PF) and Pulmonary Hypertension completed the entire 26.2 miles towing an oxygen tank. Do you still need reasons to not try?

Talking about his achievements, Wilson said he was expecting to finish the race in nearly 14 hours, but he outdid his own expectation and completed it in nearly 10 hours and 55 minutes. In fact, he even said that he used to be able to run a mile within 5 minutes.

However, his move was highly dangerous and even his doctors discouraged him from participating in the race. Wilson who chose to participate in this anyway, said “My doctors have cleared me but they’re not thrilled about it.” He further added, “It’s not good for my heart to do marathon like work.” We are glad that Wilson successfully finished the race and we highly respect him for the cause he was walking for – to raise funds for the Pulmonary Fibrosis Foundation.

According to Wilson, the average survival rate for people with both Pulmonary Fibrosis and Pulmonary Hypertension is about 3 years but Wilson has been living with both the diseases for nearly 5 years now.

If you are losing out on the motivation to achieve your dreams, this man’s extraordinary deed will definitely move you unless you are a rock that isn’t get affected by anything.