Years ago, if someone mentioned ‘men’ and ‘make up’ in the same sentence for the topography of the Indian subcontinent, then one would assume that to be a joke. However, today the conversation has shifted towards normalising a lot of things which were probably ‘normal’ already but courtesy the dynamics of societal behaviour and perceptions, a paradigm shift took longer than it should have. Make up is no more associated with a single gender. It definitely doesn’t undermine or dent anyone’s masculinity nor does it challenge the norm of what ‘manly’ means. On the occasion of International Men’s Day, we decided to go down memory lane and reopen the conversation around men wearing makeup which was our core discussion with Bollywood actor Aditya Roy Kapur last year. 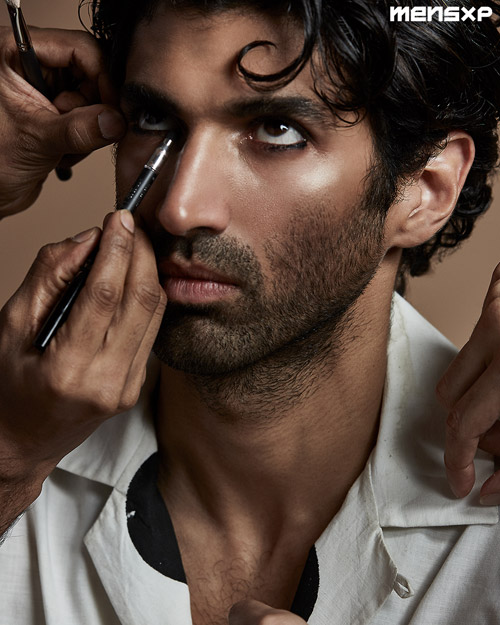 Why is beauty, and by extension, make up, a feminine thing? It clearly is a man-made concept, because if we take a close look at the animal kingdom, males are often more colourful and more 'beautiful', as compared to females; the best example being the majestic peacock. Also, from a more inclusive and 'woke' perspective, why should beauty be treated in binaries? Be it men/women, masculine/feminine, gay/straight – why can't everyone just embrace beauty the way they want to, without worrying about whether it fits into the moulds of the society? These are some of the questions that burned bright, aflame, against the highlighted glow up of the contoured cheek bones of a perfectly heterosexual Kapur.

"I think India is ready for it, absolutely. Wear make-up if you want to. Wear whatever you want to. It's a free country, and paying heed to uncalled for judgments and opinions will only hinder your personal growth, sense of fulfillment, and most importantly, happiness," quips Aditya. He also agrees that the pace of make-up related consciousness trickling down to the masses is painfully slow when compared to, say, clothing and grooming of hair and beards.

Kapur is forthright enough. He owns up to the fact that despite his rather novice footing in terms of make-up and male beauty in general, he fails to understand the hullabaloo over something as harmless as a few products and colours on a man's face. "Really, what's the big deal? What is this never-ending debate on whether make-up is masculine or feminine? I think make-up is just make-up. It's something you put on your face to appear a certain way, like in my case, whatever the script demands. Whether I put on an eyeshadow or a kajal or whatever, it doesn't define whether I'm masculine or feminine. At least no one thinks so when Johnny Depp does it. I fail to understand how putting on make-up makes anyone less of a man," he says.