In a team where MS Dhoni reigned supreme behind the stumps for years, Rishabh Pant surely had big shoes to fill as Indian selectors prepared for life without 'Captain Cool' in the dressing room. The Delhi southpaw did impress with notable contributions in crunch situations, but he never managed to convince the Team India management, pundits or fans.

The aggressive brand of cricket that Pant brought to the fore has been his bane and boon. On his day, Pant would tear into some of the best bowling attacks. But, on other days, he would disappoint like no other. His inconsistency and lack of temperament saw him struggle to cement his spot in the Indian team. 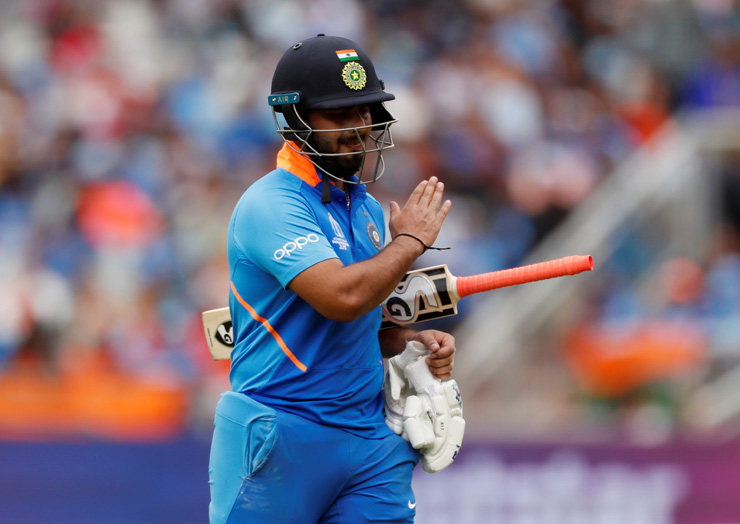 Pant has surely worked on his frailties. For one, he's no longer a one-show pony, heaving every ball on the leg side. He has worked on his game to open up the scoring opportunities on the off-side. But, Pant is currently struggling with another familiar problem: weight issues. The left-hander barely looks in shape which also seems to have had an impact on his game.

In the ongoing season of the Indian Premier League (IPL), Pant, who has been a notable performer over the years, has blown hot and cold for Delhi Capitals (DC), While his team has been enjoying unmatched success, Pant has struggled both with the willow and behind the stumps. The 22-year-old has scored 217 runs, without a single fifty, at a strike-rate of 117.30 in 8 games so far. To add to his woes, Pant has been equally shoddy in the wicket-keeping role.

At a time when things aren't exactly going his way, Pant was handed another critical blow after selectors axed him from the Indian squad for their upcoming limited-overs series in Australia. The youngster failed to make the cut for the both the ODI and T20I squads owing to his poor fitness levels. Rahul Dravid-headed National Cricket Academy (NCA) had also asked the BCCI to share an update on Pant owing to his weight issues.

A quick fitness test for Rishabh Pant ahead of today's game.#Dream11IPL pic.twitter.com/WGjJpvZIqH

— IndianPremierLeague (@IPL) October 14, 2020"The Indian team fitness trainer had shared his perspective on Pant some days ago and we believe he's overweight. Regardless of what’s obvious on the field, the BCCI and the selectors will have to take the fitness report on Pant into consideration before they can pick him. The selectors need to speak to trainer Nick Webb before taking the call,"

BCCI sources were quoted as saying by Outlook.

In his absence, KL Rahul will undoubtedly be seen carrying out the chores of a wicket-keeper in the limited-overs series. But, the Team India management could hand an opportunity to young Sanju Samson who has been included in the T20I squad. Samson has been in ominous form for Rajasthan Royals (RR) in the IPL this season, scoring 326 runs, including three fifties, at a strike-rate of over 150 in 12 games so far.

Sanju Samson deserves the same level of support from Kohli, as Rohit received from Dhoni early in his career

With his fitness, technical correctness, ability to hit all round the ground, he brings so much more to the table, especially when compared to Rishabh Pant.#INDvsAUS pic.twitter.com/10ZhYb0hNY

— Fake Account (@offlfakeaccount) October 26, 2020 "Rahul is being looked as India’s first choice white-ball keeper till the 2021 World T20 and beyond. Also he has impressed everyone with his leadership skills and that’s why this elevation as vice-captain,"

an unnamed source was quoted as saying by PTI.

"In any case, all three teams will be there, Pant, if need be, can be added to the squad,"

It's definitely not the end of the road for Pant, but the Indian selectors have undoubtedly made their intentions clear regarding his fitness levels. Even if he's a wicket-keeper, being overweight is almost criminal in modern-day cricket, especially for a team where Virat Kohli has set the bar pretty high. Moreover, Pant, now, has big competition from Samson who is not only fit but also in prime form.